Why I felt Wrestlemania 32 was amazing!!

Let's start of stating I'm a grown man in my 30's with a wife and kids. I guess that's saying I'm not the stereotypical smark my keyboard warrior in my moms house asking for privacy while I complain about a show I spend 6 hours plus watching (raw, smackdown, nxt). Not trying to start a war with anyone but I just had to address the first elephant in the room. I watch WWE because of what it stands for ,,,, entertainment!! 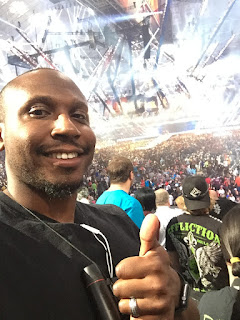 Wrestlemania 32 fit guys like me! who cares who got pushed who got buried. Who cares who deserves a spot, you wouldn't know any of the wrestlers if they didn't get pushed to be on tv for you to notice them! It's entertainment, not a sport. I spent $1000 to watch the greatest show in person not the greatest sports ticket! So how did it do?
Pre match - Ryback vs Kalisto
I didn't see it because I was outside trying to get in! I'm from Chicago so I was burning up in the Dallas sun next to a guy dressed in a unicorn!

I got settled in during the Usos vs the Dudleys... I have to admit I cheered for the Dudleys because I grew up watching them. I thought it was cool a black guy and white guy brothers and they looked like to geeks who can thrash anyone! I wanted them to win but it was cool seing the Usos fly through the air! It was entertaining.

The ladder match
This match was amazing! The crowd was über into it from the crazy dive through the ladder , to the the kalisto spring board flip and splash/fall! I cringed at the suplex on the ladder I thought it was a botch and Owens was legit hurt. Ryder won the crowd with the elbow drop! Wow we was primed to chear woo woo woo (sorry)... Thoroughly entertaining

Break the walls down!
Wow what a match I lost my voice from the ohhh! Wanted to cheer for the last time with a win but Jericho always does the job for mania I think this his first win in maybe 5 or so

New day
This match was boo but then the magic happened
3 of the most entertaining wrestlers of my childhood came out. In their prime I couldn't afford to go see them and my parents didn't value wrestling but I thank GOD I had the finances to hear that music and that crowd as they came out! Shawn Micheals still looks like he can go. Stone Cold the no games stunner like days of old. Whimsical Foley still making me laugh but looking like a legit threat! Wow this was perfectly placed after what would've totally killed the crowd! There was more new day shirts and signs than any other talent! Despite what the old heads say... New day is definitely over! The only people who was more over? The legends I mentioned. I finally got a chance to see what people meant when they said it was nothing like a stone cold pop! I was headed for food until I heard this!

The ladies match was food time for me for religious reasons. Not being sexist. I heard it was a good match! I don't listen to rap no more for religious reasons but I have to admit I popped hearing Snoop my favorite childhood rapper (poor parenting ) haha. The crowd was hyped and I respect their talent.

Shane vs Taker
This match started slow and made me remover the slow fumbling around type wrestling of my childhood. The crowd including myself was biting our fingers in anxious anticipation for Shane to do something stupid for our entertainment! When he cut the gate we popped, when he crashed on the table we popped. By the time he began ascending to the top we totally forgot about the beginning of the match! I recorded my reaction as I watched him fall breaking my usual stoic reaction. We all chanted thank you Shane! Thank you Shane for risking your life for my entertainment!

Finally the Rock has come back to Wrestlemania
I grew much more emotional than I'm comfortable with as the Rock came out! The reason I began working out, coming back to wrestling after the 80's , the reason I came back as an adult! The rocked looked like me, had swag like me, was funny , and can wrestle. If your still reading of course you know why people love the rock! I felt like my money was well spent already and then the Rock came to give us desert cutting a awesome promo he controlled the crowd in the palm of his hands! Then when he ripped into his gear and said he wanted a match I yelled like I did when Macho man said "Elizabeth , will you mar-ry-me?" . I lost my voice and jumped up even if it was 6 seconds. ... Then John Cena !!!!! Wow I knew he was coming but wow and I seen him burry like always but I'm in my 30's Hogan, Goldberg, Sting, dX , and the NWO birdied everyone too! I pay to see stars be stars not people become stars! They came to entertain me!

The bad part
Haha they did bury the main event to be honest. Nothing mattered after the Rock! I was ready to go home. They tried hard! The Game intro was amazing! It was very disturbing but he looked like an awesome villain! I tried to cheer for Reigns I think 60 thousand did. A small kid behind me said "reigns is cool triple H sucks daddy" .. The match was doomed when they started with a lock up , he should've rushed into a spear right away and have Steph pull him out but .. Hey I am not a writer. I still enjoyed the few cool spots . I appreciate the effort , I loved seing him win again. Many did cheer but the the smarks spending $1000 plus on tickets alone was the voice that's heard. 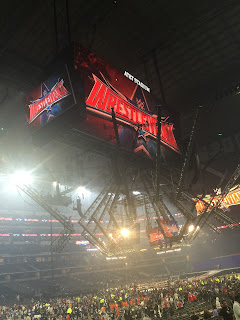 Wrestlemania was amazing because it was well wrestled matches with the stars that I grew up watching coming back to entertain a "Mark" like me. Not to be fair , but give me wrestling entertainment! Thank you WWE.. Sorry smarks

Posted by atechieinchrist at 2:55 PM