So after a whole year for debate I finally purchased the Surface Pro 2. I know as a techie, it is odd I would wait that long to get a new gadget but this was different. Let me explain. I have been using Macbooks for years and I was a self admitted, apple fanboy! I even grabbed the mac mini , and Imac just to finish the spread. Of course I had to compliment it with IOS devices from Iphone to ipads. Like most in the tech industry, if we are being honest, we grew bored of OSX and IOS as of late. I was waiting for ios 7 but it was new for the worst. So for the sake of my thirst for something new, I hoped on Chromebook, and wow here we go again! I became fully immersed in Google and I was loving the new updates and the tons of opportunity for tinkering. Then I hit another big wall. I find myself constantly trying to find workarounds! Google tech should be called the work around tech. In the back of my head I kept debating should I dive back into windows despite the biggest deterrent the $1250 estimated expense for getting what I want in the surface pro 2. After a year, GOD blessed me with my wife deciding I can have a Surface Pro 2 as a Christmas gift. Especially because I sold my Macbook,, Chromebook, and Nexus 7 to finance. So now I give you my first week review written with my SP2.

The first thing I thought while taking the surface from its packaging was , "whoa is this heavy!" Now mind you before this I had a nexus 7 so I was use to a feather light tablet. I guess that's the curse of having it in a tablet form factor, people naturally expect it to weigh like a tablet. This is a real computer and you can feel it. It didn't feel as heavy as my Acer C7 Chromebook or even much heavier than my ipad 3 but it was definitely no ipad air or nexus 7 (duh!). I love the smooth metal. I give that reaction when I see a luxury sports car, like woah. The surface pro looks like something apple would make, trust me that's a compliment. 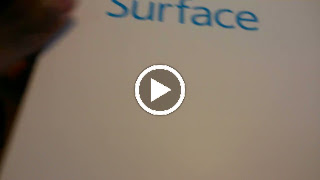 The initial boot up was 15 seconds, this is amazing on first starts and it asked the usual set up questions. I know it isn't as fast as the log in for Chromebook, but I think its faster than the macbook. It's a lot faster than typical windows pc's so I was impressed. I thought it was cool how it automatically pulled in the desktop background from my actual desktop computer I have in the basement. It was all tied to my outlook account. Coming from apple and Google, of course I LOVE SYNERGY!

I quickly became immersed in this gadget. It was fun again! I had the unfamiliarity with using touch on windows 8 in a new form factor. I also was impressed with the quick speed. I forgot how real multi tasking worked. I didn't have the pause state of ios, or the awkward windows of osx. I wasn't just regulated to tabs like in chrome but I was side by side with the snap feature. Watching YouTube tutorials on surface , (out of necessity) , on one side, and trying out what I learned on the other. It was great.

Lets break it down further to the things I like:

Enough of the mushy stuff lets talk a little about gripes.


Two days in and I refreshed because I downloaded some questionable programs. Programs not apps , closed ecosystems protect us from our stupidtiy but windows allows us to make catastrophic mistakes, but wow I still got to put it in here. I also had my chrome browser crash when I was running it in windows 8 mode.

Chrome needs help! Its sooo washed out. I am using it now because thats what I am used to using. I like chrome but the look of it is horrid. Not to mention the icons are just like you see on a chromebook so I have to use a type keyboard. I know I like it but its worth noting. It doesnt work in windows 8 mode unless you make it a default app, but once you do that internet explorer only opens in desktop mode so basically you have to chose. this is both of thier fault. Googele+ is single colum on IE and renders wrong. I guess google hates the surface. cmon google . The saving grace is the apps launcher on my desktop. I love that I can just click on the apps launcher to get all my google goodies. I still need a more pixel friendly chrome browser.

No pen slot - I cant find it, I havent been out so I have hope but I am nervous that my pen is not in one of my kids toys. It supposed to be held in the power adapter slot but if I got it plugged up , wouldnt I be most likely using my keyboard and NOT a pen? hmmmm

Track Pad- yes I praised the trackpad earlier for precision and highlighting the text but while editing this document I discovered that I need a clickable trackpad which will help it be easier to drag to highlight.


In Conclusion-- I know some of you scrolled to this section trying to find a quick answer. I know I was while researching over the year so I am going to give you answers I was looking for. I LOVE THIS MACHINE! You cant go wrong! You have the app launcher and quick boot and its light (for a laptop). Microsoft built both the hardware and software so they have regular updates. Basically it meet most of the things you like the Chromebook for. It also has a nice keyboard and polished metal like the Macbook. If you are a Apple fanboy it will be hard but trust me this thing is cool. There is also synergy with skydrive! You can save all of your things automatically and the mail app is much faster than Macbook. Its heavy so
if you like to hold your tablet get a ipad air but if you like to read in your lap you can go with the surface pro. You will realize what you missing when you play steam, browse foreal, and try new things on this computer.


I can honestly say after my Ipad, Iphone, nexus 4 , galaxy mega, nexus 7 , Chromebook, Imac, etc, purchases this past year, the Surface Pro 2 is my favorite device!

I still haven't tried Office, Skype, etc. I have a lot more things to try, so prayerfully I will have future updates. GOD BLESS

Posted by atechieinchrist at 4:23 PM